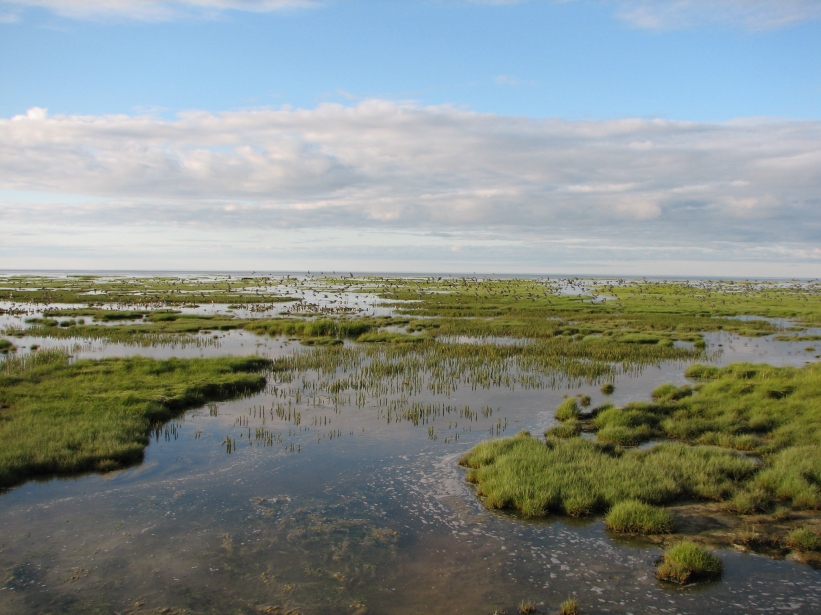 A a composite video created by Ron Ridout is available here.

Another video by Stu Mackenzie is available here.

This report summarizes the sightings from a crew stationed in the Chickney Point area (click here to view map)on the western coast of James Bay from July 15 to 31 as a part of the Western James Bay Shorebird Survey. The Chickney Point camp (click here to view map of base camp)  is the most northerly of the project’s three field camps in 2012 and is located just north of Chickney Channel (Albany River) roughly 45 km directly south of Akimiski Island, and about 150 km north-northwest of Moosenee. Extensive mudflats in the region, fuelled with nutrients from the Albany River, its tributaries and the innumerable smaller creeks, provide excellent conditions for staging shorebirds and waterfowl. The extremely shallow gradient shoreline in the area is vegetated by dense tall willow (Salix bebbiana, S. planifolia) thickets, giving way to vast supratidal graminoid meadow-marshes (Carex paleacea, Calamagrostis inexpansa, Juncus balticus) interspersed with low willow thickets, grading finally to brackish and saline tidal marshes (Puccinellia spp., Hippuris tetraphylla, Plantago maritima, Salicornia sp.)dissected by a myriad of small ponds, drainage channels, tidal inlets, and exposed mudflat. The spruce forest begins 5-6 km inland from the high tide line. Previous aerial surveys of this region have shown large concentrations of shorebirds during the fall migration.

Shorebird numbers were impressive! During the two weeks, the overall number of shorebirds exceeded 1 million (duplicates almost certainly exist) of 23 species. Most of the individuals observed during this time were adults. Numbers and diversity varied substantially with the height and timing of the high tides. Shorebird counts exceeded 100,000 on three days: 108, 730 on July 21; 120,076 on July 24, and 123,777 on July 25 making this one of the densest concentrations of migratory shorebirds in the province.  Semipalmated Sandpipers were the most numerous species on most days ranging from 3,000 (low on July 29) to 88,130 (high on July 25). White-rumped Sandpipers were next ranging from 5,615 (low July 27) to 28,750 (high on July 21). Semipalmated Sandpipers were most numerous earlier in the month with a gradual shift to White-rumped’s by the time we left. There were also impressive numbers of Dunlin ranging from 1,100 (low July 28) to 19,420 (high on July 21). Numbers of godwits were also significant. We were impressed by a flock of 250 Marbled Godwits on our first trek to the flats that was dwarfed by subsequent counts and with a high of 1,182 on July 26. Considering that the most recent estimate of Ontario’s Marbled Godwit population is a ”few 1000s (see the Ontario Shorebird Conservation Plan; Ross et al. 2003), a substantial portion of the Ontario population was observed in a couple of kilometers. Hudsonian Godwits were also numerous with nearly 1,000 observed on most days with a high of 1,876 on July 24. Low numbers of Whimbrels were observed as well with a high of 52 on July 25. High flying flocks of Marbled Godwits were observed heading southwest on several days, presumably headed toward their wintering grounds in the Gulf of California.

Greater and Lesser Yellowlegs were abundant in the small tidal ponds with high counts of 901 (July 19) and 1,732 (July 24), respectively.

Least and Pectoral Sandpipers preferred the more inland grassy pools and reached numbers of 585 (July 17) and 424 (July 29), respectively. All other shorebirds were present in low numbers, but increasing toward the end of the month.

Other sightings of interest:

American White Pelican – present on most days with a high of 65 on July 19.

Great Blue Heron – 1 wing-tagged individual (light green) on July 29 – (herons with this colour of patagial tag were banded as nestlings in 2011 and 2012 on Howland Rocks, south of Spanish, in the North Channel of Georgian Bay and in 2012 on Mad Reef, near Stoke’s Bay, Lake Huron, 700 and 850 km south of Chickey Point, respectively; pers. comm. Chip Weseloh) Northern Harrier – most abundant raptor in the area with a high of 11 on July 28 Yellow Rail – numerous around camp and in surrounding sedge meadows – conservative high of 15 on July 21 Virginia Rail – two singing males around camp heard between July 25 and 29. One of the most northerly records in the province.

Eastern Kingbird – one on Jul 29

Bobolink  – pair near camp. Male heard on July 15, pair discovered on July 17 and another or likely the same pair approximately 1 km distant on July 18. Possibly the most northerly breeding evidence in the province.

The Western James Bay Shorebird Survey is a cooperative effort spearheaded by the Canadian Wildlife Service (CWS), the Royal Ontario Museum, and the Ontario Ministry of Natural Resources.  The Ontario Ministry of Natural Resources (OMNR) also provides helicopter transport to and from field camps and accommodations in the staff house while crews are in Moosonee. Thanks to Ken Abraham, Rod Brook, Sarah Hagey and Kim Bennett of OMNR for providing logistical support. Additional support for the Chickney Channel expedition was provided by Bird Studies Canada. Many thanks to Ron Pittaway for providing some details in his previous report from Jean Iron on James Bay shorebirds.

Patient Helicopter waiting to take us to Chickney Channel. 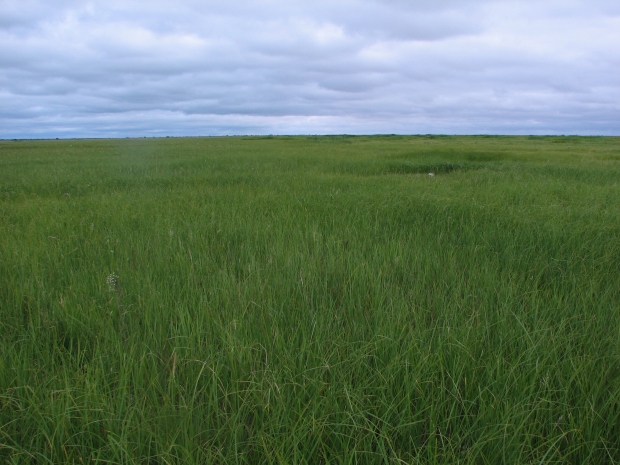 Seemingly endless grasslands along this section of James Bay. 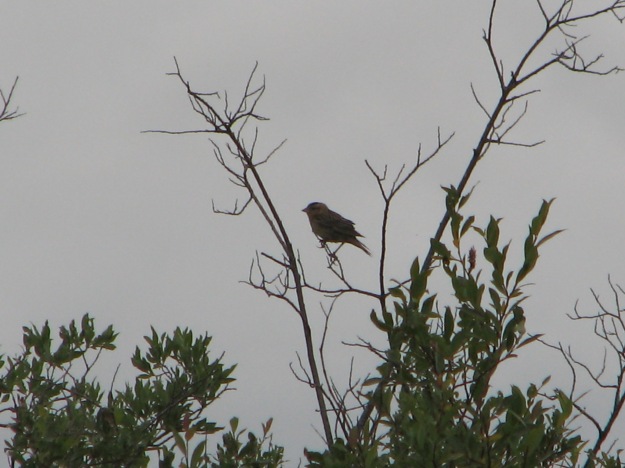 One of the most northerly records for Bobolink in Ontario. A pair was present near camp for 3 days. 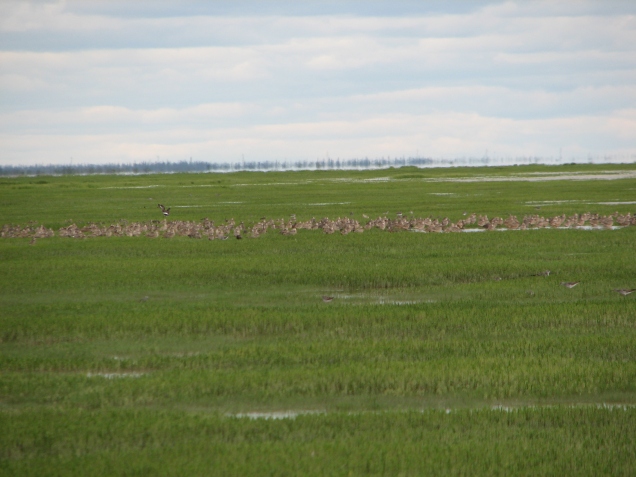 That’s what we call a shit-ton of Marbled Godwit.

On the edge of the flats… 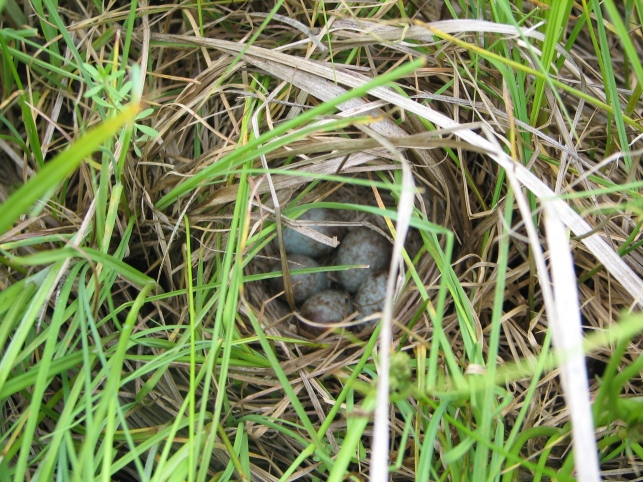 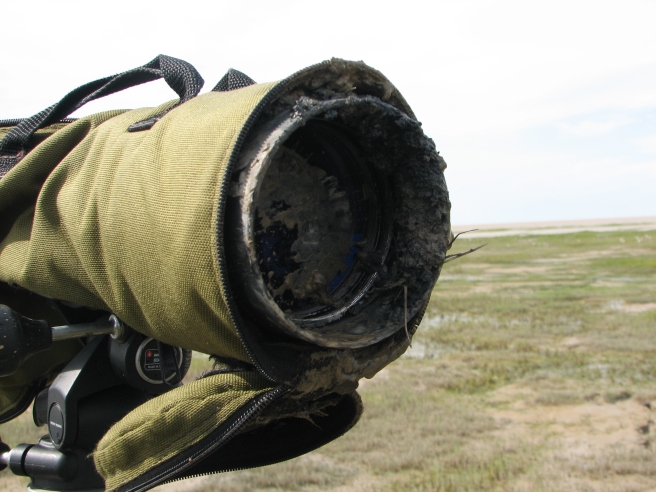 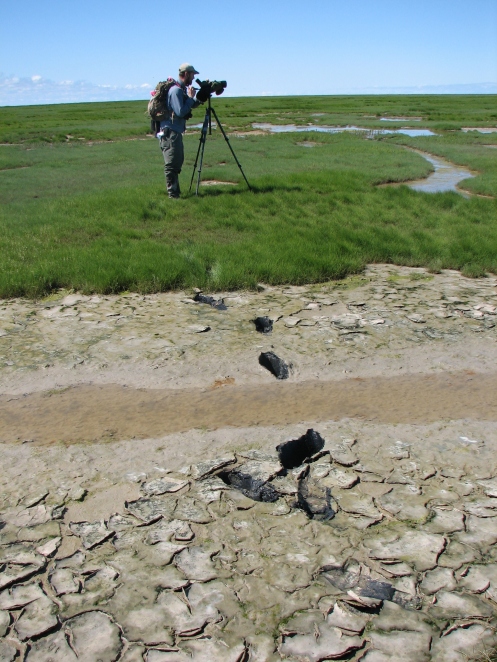 Friis on the flats. 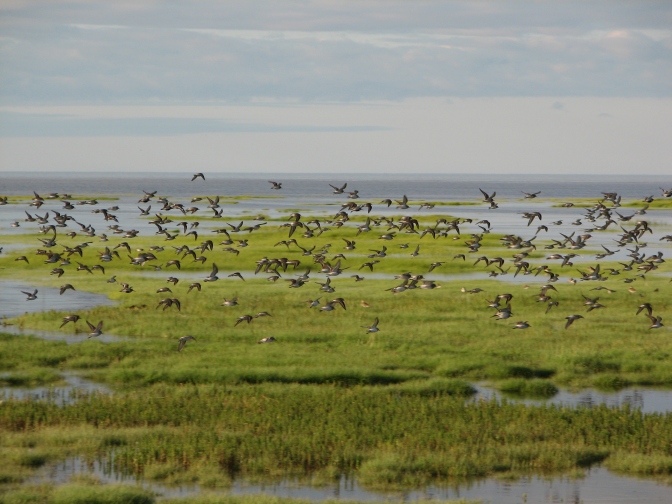 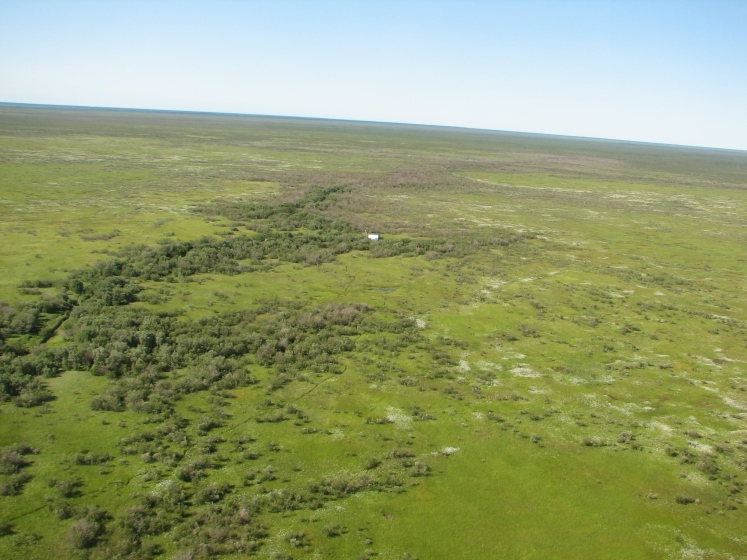 Camp from the air.